From UnionCloud Support Wiki
Jump to navigation Jump to search

This page details the content that has been released in the patch named in the title above, if you were looking for the content from a different Sprint, or Union Cloud Release, please take a look at the Version History page to see all Sprints and Releases.

Previously, the logic for Alumni Anonymisation considered any students that had not logged in within, and were not students since, the period you configure from the Admin >> Setup >> Alumni screen, however this presented an issue that if a user hadn't logged in, but still had an active Group Membership, or an Event Ticket in the future, they could still be deleted. We have amended the logic to not consider users for deletion in either of these cases. 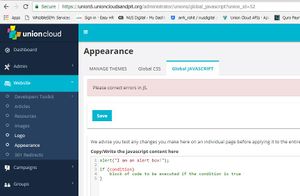 when a user submits an updated Global JS file, UnionCloud says 'Global javascript updated successfully' which isn't true. The file has saved, but is then processed in the background before being applied to UnionCloud, if whilst the file is being processed there are any issues, incorrect syntax, missing bracket etc. The file won't update on UnionCloud, but we have still given the end user a message saying updated successfully.

We have now amended this process to prompt the user to update Global JS before the file will save successfully.

Group Widget issue meant that when a user uses the search functionality on the Groups Widget, after finding the groups the overlay, with the spinning loading icon doesn't disappar, meaning the UI prevents the user from interacting with the results, this is a bug that was injected in the previous release.